Easy to clean and wash, simply spray with water and leave to dry or just give it a quick wipe with a damp cloth. This cover perfectly fits our 10 seater cube dining set.

Update: You can still shop online with us as normal and our delivery times are unchanged.

Shipping costs for this product:

Update: You can still shop online with us as normal and our delivery times are unchanged.

Any orders before 2pm will be dispatched on that business day - Monday to Friday. The item will arrive within 2-3 business working days after purchase.

If you place your order on a Saturday or Sunday you can expect your item will be dispatched when our warehouse reopens first thing Monday morning and therefore you should receive your item on the Wednesday or Thursday.

The price fits the item
You have to put it together yourself which seemed to take forever and not all the screws fitted in the holes so we improvised with cable ties to secure it.
I wouldn’t say it’s the best rattan furniture I’ve had but would recommend it as a cheaper option to the ones you see in the garden centers

Built it myself, took few hours but did it over 2 afternoons. Straight forward following instructions but did make a mistake of not realising there was 4 bigger “o” screws which was needed for table and had used them in chairs somewhere 🤷🏻‍♀️🤦🏽‍♀️Got replacement screws so all well! Thankful for tools provided. Arrival of goods in store was earlier than expected👌🏻 Delivery took a bit longer but once I spoke with LauraJames it was sorted out and delivered quickly... live in Scotland and when I ordered it came up with £3.99 delivery charge which we did think was odd and rightly so as once order placed LJ contacted us to say £100 delivery fee which is not unreasonable but just passing info on as for customers to get realistic price when ordering.... 10’piece cube looks great value for money and would defo purchase from these again! I have advertised Pics of my set on Facebook advertising LauraJames as couldnt fault them. Thank you 😊 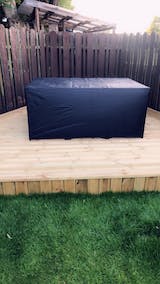 N
N.M.
Screw where not going in some holes

This is a lovely product. Took longer to assemble than expected but very good quality. Very pleased with our furniture. Good value for money.

Do you want to be the first to find out about sales, competition time and new arrivals?

Easy to clean and wash, simply spray with water and leave to dry or just give it a quick wipe with a damp cloth. This cover perfectly fits our 10 seater cube dining set.